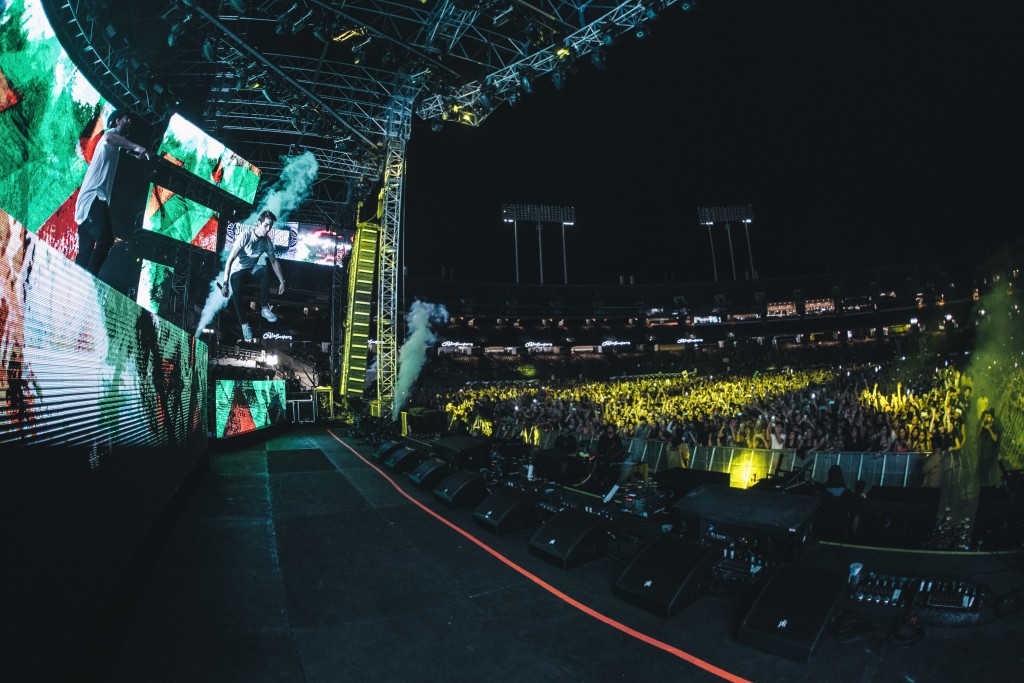 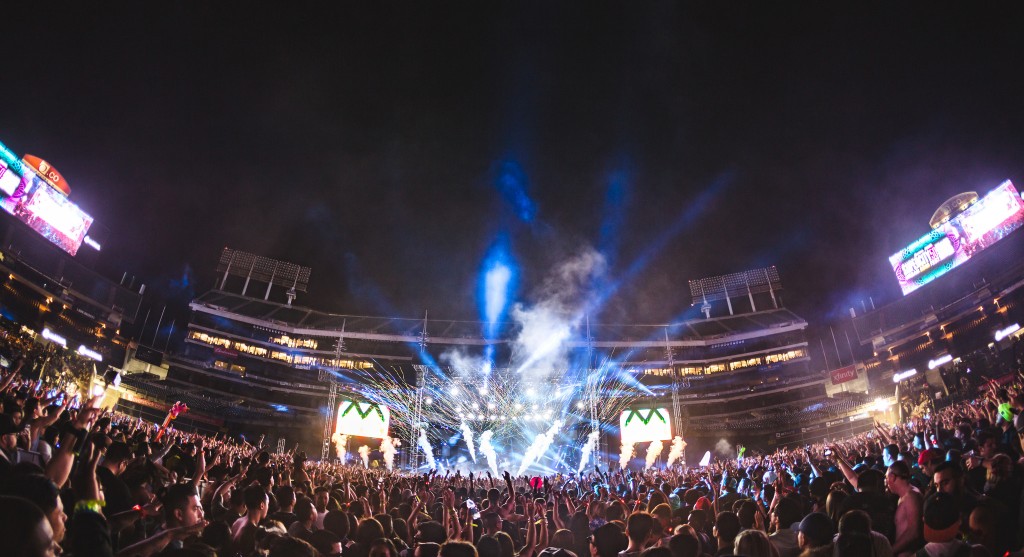 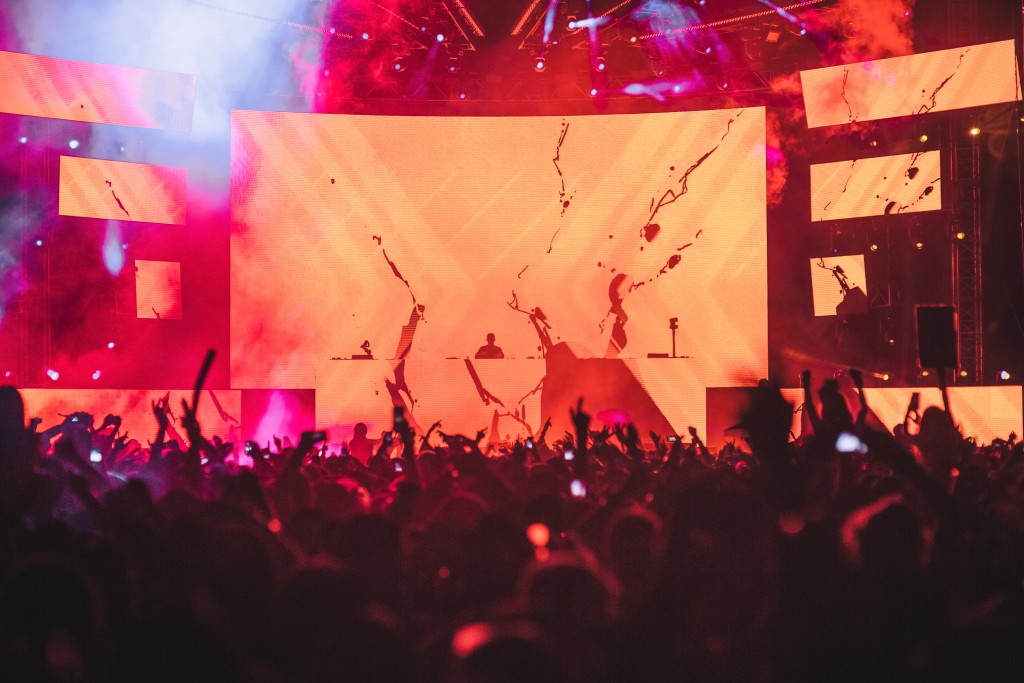 SUPERCITY Summer Fest will be held August 19 at the Oakland Coliseum from 3pm-12am. Information pertaining to travel/stadium maps, prohibited items, parking information can be found on our Info Page.

SUPERCITY was created with the positive idea of always building and refinement. Our goal is bringing together major cultural platforms that span ethnic, international, and economic boundaries while using music from multiple-genres to bond them in perfect harmony and bliss. All Citizen Built!

SUPERCITY Summer will be held at the Oakland Coliseum.

Our amazing Phase 1 and Phase 2 have been announced.

Once again SUPERCITY Summer will be held Friday, August 19. Current Schedule and Line Up information can be found below.

Skrillex
SUPERCITY Summer, August 19
Sonny Moore found club and mainstream stardom beginning in 2008, when he swapped his gig as the frontman in post-hardcore band From First to Last for the dancefloor-oriented project Skrillex. He originally used the name for live DJ sets, but in 2009 the project moved into the studio with Skrillexremixing the likes of Lady Gaga ("Bad Romance") and Snoop Dogg ("Sensual Seduction"). In 2010, the self-released digital download EP My Name Is Skrillex appeared, combining the Benny Benassi andDeadmau5 styles of electro with the same type of over-the-top samples and giant noise of electronica acts like the Chemical Brothers and Fatboy Slim. - ALLMUSIC.COM/David Jeffries

DJ Snake
SUPERCITY Summer, August 19
A Grammy-nominated producer, DJ Snake is a Frenchman at the forefront of the trap music movement, having taken the genre to the charts with his 2013 single "Turn Down for What" featuring Lil Jon. Born William Grigahcine, Snake's production work on Lady Gaga's 2011 effort Born This Way earned him a Grammy nod when it was nominated for Album of the Year in 2012. Also in 2012, he signed with Diplo's imprint Mad Decent and released the single "Bird Machine" on the label in 2013. The singles "Slow Down" and "Together" also arrived in 2013, along with more work for Gaga on her ARTPOP album. His big break as a solo artist came late in the year when "Turn Down for What" featuring Lil Jon arrived and became the most popular crossover trap hit since Baauer's "Harlem Shake." - ALLMUSIC/David Jeffries

Carnage
SUPERCITY Summer, August 19
It's easy to feel the impact on every track the Los Angeles-based artist produces or remixes. With a versatile mindset and deft approach, he siphons electro, hip hop, pop, and trap into an intoxicating brew unlike anything out there. It's dirty, defiant, and diverse.

"Making music is about having an impact," exclaims DJ Carnage.

Carnage embraced music at a very young age. Before moving to the suburbs of Maryland, he grew up in Nicaragua and Guatemala. It gave him an international consciousness and perspective at a young age that would pervade his art. In order to get through long car rides with his mom, he'd make mix CDs of everything from Kanye West to Michael Jackson, and they'd listen to them together. It was with mom's encouragement that he began actually building his own tracks.

Krewella
SUPERCITY Summer, August 19
Krewella is an electro group from Chicago comprised of sisters Jahan and Yasmine Yousaf joined by producer Rain Man. Making their debut in the summer of 2011, the trio instantly exploded onto the electro scene with their genre defying releases. Seamlessly merging infectious melodies with snarling dubstep drops, Krewella defies norms in EDM music. Onstage, the energy of Krewellaʼs DJ sets is contagious. With unrelenting growling bass, fans will find themselves raging harder than they ever have before.

Laidback Luke
SUPERCITY Summer, August 19
Dutch heavyweight Laidback Luke has a two-decade track record of doing things his way, keeping versatility at the core of his every move. He’s a source of inspiration to numerous DJ’s, from Avicii to Afrojack, and well respected by all colleagues in his field. Boasting collaborators to-date as varied as Hardwell, Diplo, Steve Aoki, and Swedish House Mafia, his music speaks of a rare balance of both chart and credible club success. The wealth of remixes and personal bootlegs under his belt begs no exception, with credits ranging from Daft Punk and Madonna to Depeche Mode and Mariah Carey.

A$AP FERG
SUPERCITY Summer, August 19
A$AP Ferg may hail from a block in Harlem notoriously known as “Hungry Ham (Hamilton Heights),” but that never completely defined him. Whether it be launching clothing and jewelry lines or attending art school, he constantly bobbed and weaved past expectations. As a rapper, unpredictability remains his only calling card. The next member of the A$AP Mob collective to have a solo project, he can slip from gruff, gritty rhymes to soaring singing, and he does so seamlessly. On his A$AP Worldwide released mixtape, Trap Lord, he’s got his own musical domain on lock.

SAGE The Gemini
SUPERCITY Summer, August 19
Coming out of California's Bay Area, rapper Sage the Gemini broke through with two viral party singles, "Gas Pedal" and "Red Nose." "Gas Pedal" landed first, with the audio being uploaded to video-sharing sites in 2012; the track combined Sage's restrained delivery with an infectious, Ying Yang Twins or hyphy-type hook. Even without the video, "Gas Pedal" ended the year with over three-million views on YouTube, and an official video landed in 2013 along with another track, "Red Nose." His debut album, Remember Me, followed in 2014 with guest shots from Iamsu!, Kool John, and others. - ALLMUSIC.COM/David Jeffries

Kiiara
SUPERCITY Summer, August 19
Slightly left-of-center pop artist Kiiara is a breathy vocalist whose output falls somewhere between that of Jhene Aiko and Lorde. The Illinois native previously recorded as Kiara Saulters and independently issued the homey acoustic pop song "Bring Me Back" in 2013. Eventually signed to major-label Atlantic, she worked with the Cataracs' Niles Hollowell-Dhar and David Singer-Vine, as well as Brenton Duvall andFelix Snow, and recorded Low Kii Savage. The EP, which alternated between downcast electronic pop and bass-heavy, trap-style rap production, was a radical change in direction. Preceded by the breakout single "Gold," it was released in March 2016. - All Music/Andy Kellman

DJ Sliink
SUPERCITY Summer, August 19
He took the reigns as Jersey Club’s first global star, spreading the genre from humble beginnings in Newark’s DIY party spaces to international culture hot spots like London, Paris, Milan and Oslo – not to mention mainstream attention from MTV, SPIN, Vice, and more. After shooting to post-EDM stardom with a collaborative EP on Fool’s Gold with Flosstradamus, soundtracking Paris runways for Alexander Wang and Rick Owens, and playing festivals around the globe, Sliink is entering the next chapter of his career. The OWSLA Records bossman Skrillex sought out Sliink’s diverse club sound as the newest addition to their eclectic roster. Hard at work on his first project for the label, you can trust that Sliink has few tricks up his sleeve for 2016.

Team Ezy
SUPERCITY Summer, August 19
Few musicians on this planet are able to say that their debut offering is a collaboration with Skrillex on OWSLA, yet only one of them is also credited as the lead A&R for its release. Team EZY, aka Drew Gold, is this enigma – a producer and DJ born, raised, and living in Los Angeles whose decision to prioritize a focused future over fast fame has put him in a position unlike any of his contemporaries. The Team EZY moniker originally debuted as a duo for a senior project in high school. For the creative assignment, Drew and his buddy Sean translated their love of hip hop into a full album, spending long hours wailing away at their MPC with Drew also putting in his own verses over the top. Following high school, Drew moved to Denver for college where the unique vibes of experimental electronic artists like Pretty Lights and Bonobo infiltrated his musical psyche, synergizing with his hip hop roots and further directing his attention to the more bass-driven side of dance music.

We thank our partners and sponsors for their vision and individual efforts in helping to build SUPERCITY. Please CLICK HERE for additional sponsorship information. 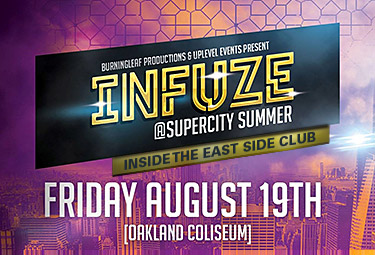 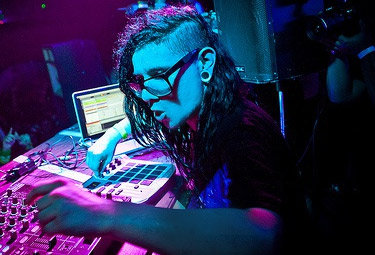 SuperCity Summer Fest will be one day of total body wreckage. Come Aug. 19 at the Oakland Coliseum, backs will blow and booties will bounce like never before. The phase two lineup just announced...

It's that time again! Presenting the the final line up for the Supercity Summer Fest. The Lineup consist of Skrillix, DJ Snake, Carnage, Krewella, Laidback Luke, A$AP Ferg, Kiiara and more.

Please feel free in contacting us via email and allow us 24 hours to respond to your inquiry.